Flight number 80 would be the final flight of the original “Around the world in 80 flights” tour so this should be somewhat of a great achievement. However, due to the number of diversions and additional flights I have added to my own tour, despite reaching the 80th flight, I have not even reached my half way point.

Since leaving Edinburgh in the UK 3 years ago I have racked up over 54,000 Kilometres which works out at over 33,500 Miles! I have passed through 37 different countries whilst I have covered Europe and the length of Africa, all the way too Cape Town before continuing to The UAE and Middle East. I then covered the entire length of India or order to reach the Maldives Islands before returning North to the Himalayas and Mt. Everest. From the Himalayas I continued to Asia and across to Japan where I have now begun to double back on myself a little. This is simply so that I can loop further South as I make my way through the Pacific Islands and eventually reach Australia.

From my home in the UK, Australia will make my geographical half way point around the world. I feel that this should be celebrated more than the acknowledgement of my 80th flight. After all, I still have many more miles to go with many more countries to visit. Having significantly amended the original route I shall be completing a total of 203 flights before my wheels finally touch down in Edinburgh UK once more.

Whilst not mathematically nor geographically “half way,” I shall be considering my virtual arrival to the island of Hawaii to be the half way point of my Around The World Tour.
Hawaii to San Francisco is by far the longest flight I will have to negotiate during the tour and will need to heavily modify my tiny Beechcraft Baron 58 in order to make the huge distance but this is still some way off for flight number 120.

I have thoroughly enjoyed the entire time I have been completing this tour although I would love to hear from people who live in any of the places I have already, or am yet to visit. See below for the offical route map and for the full list of destinations I shall be visiting (virtually.)

Blue Pins = Offical 80 Flights Route
Red Pins = Addional Destinations Added By Me
Yellow Pins = Points Of Interest I Shall Not Land At.

Please continue to follow my virtual adventures around the world and leave comments to help me to make it that little bit more realistic.

The 80th flight would be another long haul over a large expanse of sea so I was expecting the journey to be rather uneventful. This was not to be the exciting ending to the world tour that I could have had on the 80th flight had I stuck to the original route.

Beginning this leg of the tour at 09:00 I loaded up the flight simulator FSX and opened the flight plan I had prepared earlier. In order to make the distance over the sea I was eager to ensure that I have enough fuel so requested a fuel truck from Nagasaki airport. Being third in line meant that I didn’t have to wait too long before my tanks were full and I was ready to depart. I followed another jet all the way from my parking spot to the runway.

There were rather strong side winds coming down from the surrounding mountains and heading out to the sea which set my plane at a strange angle during take off. This didn’t cause any problems though. I left Japan behind me as I crossed over many smaller islands although each of them had their own substantial mountains or high hills which I had to contend with. It was a shame to be leaving behind this amazing country and very different culture to my own. I will certainly be making a real life visit to Japan to see its wonders first hand.

After flying South for roughly 25 minutes I took more of a Westerly heading to fly towards Taiwan. It seemed strange to be heading West as I have been travelling East all the way from the UK other than the occasional Northern or Southern detours. I climbed to 10,000 feet to get better fuel economy from my plane and saw a heard a few rumbles of thunder. The weather outside appeared to be pleasent so I was a little unsure as to where the sound of thunder was coming from. There must have been a mixture of cold and warm air though as I soon passed through a very bumpy patch of sky which dropped me down to 7,500 feet.

The stretch of sea seemed to last for ages although eventually the shores of Taiwan come into view maked by a large mountain. Lingering clouds blocked much of the view to the ground below so I decided to circle the city to get my bairings. The airport I had originally considered was Songshan airport which is located right in the heart of Taipei itself although the larger Taiwan Taoyuan International Airport was more appealing as a place to land. By 13:50 I had touched down on Runway 6 and safely taxied to my parking spot.

I didn’t really have any prior knowledge of expectations of Taiwan. I can only say that I know of the large production output as in the UK we do have many electronic goods which are manufactured within this country. It would be interesting to find out more about this place.

Seeing the Jodhpur airfield in daylight for the first time showed the landing strip to be rather green with vegetation. I am pretty confident that this is not the case after checking out Google Earth and various images from Jodhpur City. Even in the morning the air temperature outside as 20 degrees! I really do need a holiday to the sun.

With still no radio contact option I took off from the very quiet runway and completed a loop over the city to see some of the larger sights I knew the city had to offer. Unfortunately the heavy fog had not lifted and it was apparent that I was not going to be able to sight see. I continued to circle over the city whilst gaining altitude all the way to 15,000 ft! This was unusually high for my light aircraft and I could still not see through the mist. Up here I needed the heating elements all switched on as it was now -6 outside of the aircraft.

I knew that it would have been impossible to see anything for the journey if I chose to complete my flight to Ahmedabad in this weather so remembering how quiet the landing strip was at Jodhpur, I decided to land there again and hope that the weather cleared up on another day…

A few days later I though I’d have another attempt at leaving Jodhpur city and make my way to the next destination Ahmedabad. With the fog still hanging in the air I knew that the take off and initial climb at least, would have to be done by instruments only. The altitude of 5,000 ft came around pretty quickly and I was soon above the fog and into considerable cloud but at least these clouds were mostly low laying. I continued to climb to 15,000 ft again and saw the wide open Indian landscape stretch out below. 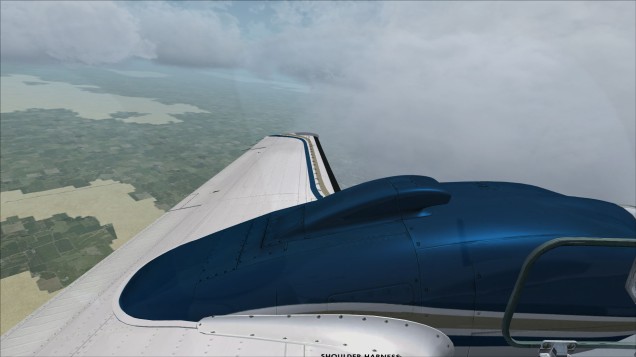 The clouds eventually thinned out again and I cut back on the throttle to slowly descend towards my half way point. I was finally able to make radio contact with Mumbai Center who gave me my squawk code 7115 and maintained flight following. My half way point of the flight actually crossed a landing strip. I had to check what it was called but found Udaipur Tower through the radio frequencies and requested a “touch and go” landing just to add an extra landing credit to my FSX statistics. There was still a slight layer of low laying fog and I took off again straight away. 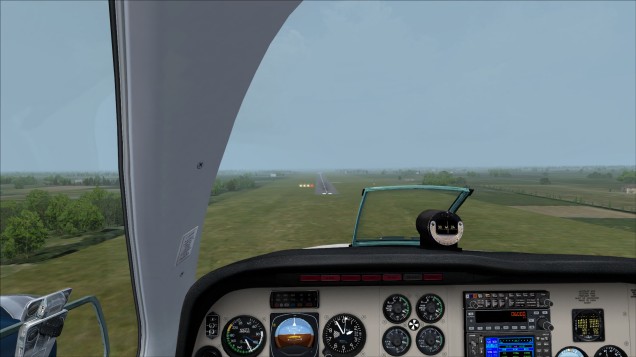 The rest of the flight was much more enjoyable as the fog dispersed and I was able to fly low across the fields at 170 knots which is pretty quick for my small plane. The crescent moon on the horizon and occasional flock of birds enjoying the rising thermals were certainly a relaxing change to the consistent fog. 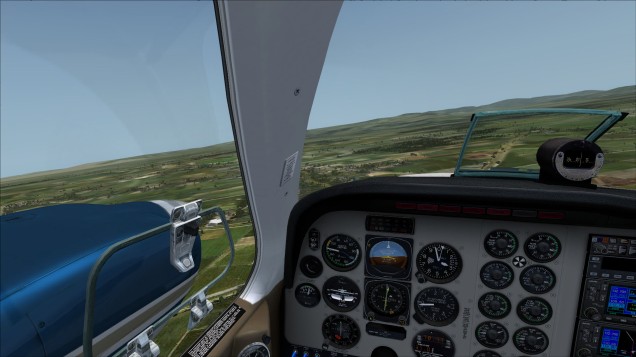 Coming into land a Ahmedabad the clouds had built up again and I am sure I spotted a flash or two of lightning. I was advised to flight straight in to Runway 23 and with no fog or crosswinds I had one of the smoothest landings of my tour. 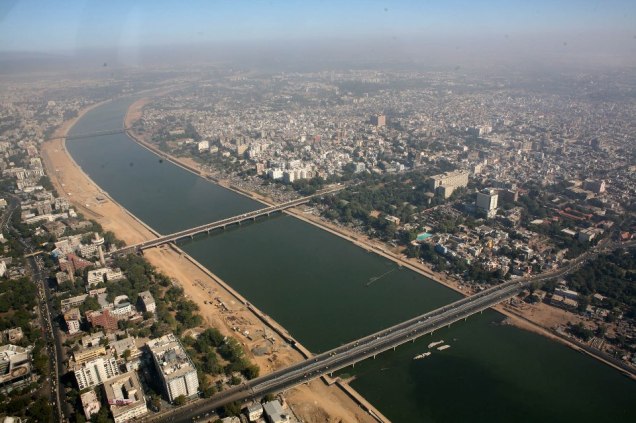 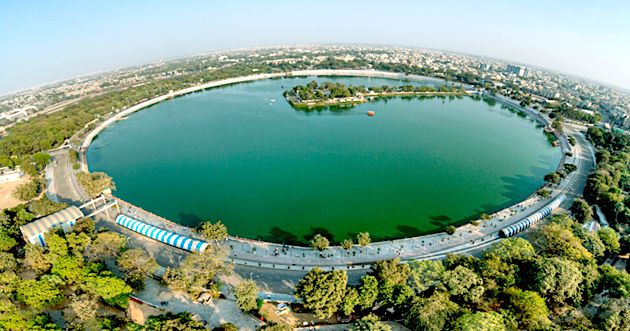 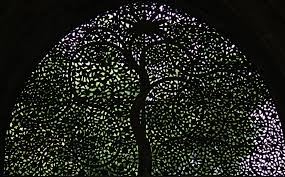 A Kaleidoscope of Colors, Ahmedabad – https://www.youtube.com/watch?v=qiQfnxbx4Jk

Walkthrough in the old Ahmedabad – https://www.youtube.com/watch?v=YXDb8tV7KaE