I started this flight by taking a few minutes to familiarize myself with my new aircraft and understand the new layout of the radio stack. Being a new version of the same plane I have already completed 18,000+ miles in, I was pretty confident I knew the majority of the controls.

Sitting in Gate F-14 of the world’s largest airport I was right to presume that I had a long way to taxi to reach the active runway. The airport was extremely lively with large jetliners touching down and many ground crews driving around the terminal buildings.

With my new plane I have also assigned myself a new Call Sign. “World Travel 80F.” The “F” standing for Flights as I was originally to complete the entire trip in 80 flights. I have since learned that with all of my detours to see additional destinations, my 80th flight will only have taken me half way around the world.

I requested my taxi clearance at roughly 10:00 and began my lengthy taxi journey to Runway 30L via K Z Z4 K K17. Trying to write down the instruction and radio frequencies proved to be very tricky. I’m going to need more practice at that. Previously I have simply been re reading the radio text within the simulator.

I dutifully awaited my takeoff clearance and proceeded to roll down the runway. A Boeing MD-80  was also taking of from Runway 30R and looked huge in comparison to my little light aircraft. I took a glance back at the massive terminal buildings and was pleased that I had watched much of the TV show “Ultimate Airport Dubai” which provided a fantastic, detailed insight to the operation of this huge airport.

It wasn’t long before I was flying over the city taking my final looks at the iconic buildings here such as the Burj Khalifa, the Burj Al Arab, Atlantis Hotel resort and “The World.” A project of man made islands mapping out the world. 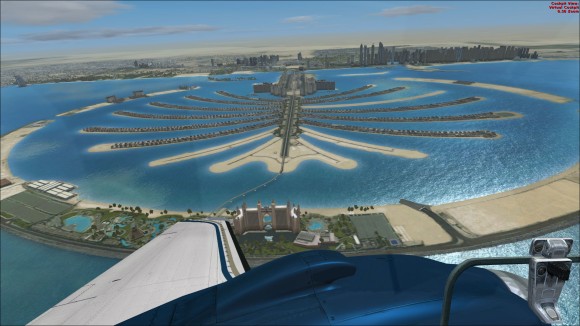 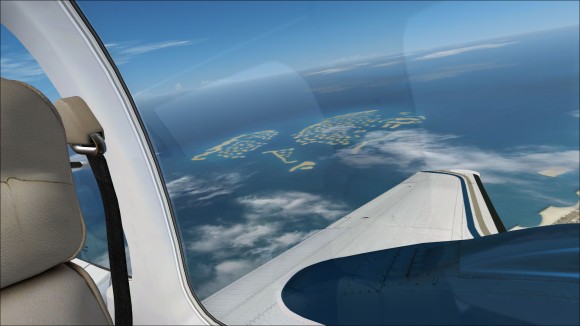 I am pretty confident that this will be the shortest flight on this World Tour. By the time I had left Dubai behind, it was already time to consider my landing pattern. I skimmed the coast line and saw many islands dotting the shore and as I turned inland towards Abu Dhabi International I was surprised to see how far away from the city this airport was. I had previously checked Google Maps and was pleased to know that I would be flying directly over Yas Marina F1 Circuit and Ferrari World. Being a big fan of Formula 1, I enjoyed seeing the 2014 Championship be settled at this track. See the video link below.

Abu Dhabi may not be on the same level of extravagance as its neighboring city Dubai although it does still boast some spectacular architecture. It will be exciting to watch this part of the world develop even further through-out the next few decades.