This was going to be a short run up the African coast, setting off at 12:35pm from the lonely Kisimayu airfield runway 23. Taxiing down the runway I could see the crescent moon peering over the few clouds nestled on the horizon.

My Beech Baron has a tendency to bank left so I simply allowed this to turn my aircraft until I was following the coast line at a heading of 030. Within a couple of minutes I was flying over Goobwayn, a small town clinging to the banks of a river. Once cruising at 6000 ft I checked the estimated flight time and saw I had roughly 1 hour, 30 minutes of air time ahead of me. My rather plain view of the desert sands was pretty accurate when compared to google earth. I used google earth to follow my path and saw a city on the coast called Baraawe. Photos of Baraawe make it look extremely old and remote. These are the places I love to discover on this journey. I would never have heard of this city if I hadn’t flown over it.

The second city I could look forward to was Merca. Merca looked a lot larger than Baraawe with many white buildings, some of them looking rather grand. With mountains shielding the city from the rest of Africa I could see it being a well protected port. Enjoying the flight with calm skies and only a handful of clouds the time when pretty quickly. Not wanting to miss I requested an altitude of 4000 ft from air traffic control and decended to get a better view. Flying over the water for a little while I saw a selection of small boats. I guess these could have been the infamous Somalian pirates for all I knew.

My flight plan was taking me further and further from the coast line so I decided to cancel my IFR and have the freedom to see the shores close up. Going lower and faster meant I was making good time. At 48 miles from the Mogadishu airport I spotted a main road and with no IFR directions I figured that following this road could be a good option.

Whilst I was looking to land I confused myself a little when I spotted a runway which was not at an international airport. I checked on the built in SatNav and it wasn’t listed. Google Earth told me that it was infact the Uadan Highway Strip. Not sure why the landing strip was there when there is the main Mogadishu airport is simply a few miles further up the same road. It was a runway built right in to the main road. That is certainly a highlight for strangest runways on this trip. I passed the airport and flew over Mogadishu. It was a large city. I vaguely remember Charlie and Ewan talking about this place on their motorbikes whilst filming “The Long Way Down.” Ewan McGregor also starred in the film “Black Hawk Down.” A movie about the events of 1993 when 2 Black Hawk helicopters were shot down in the middle of enemy territory in the city of Mogadishu.

My final decent to the airport was restricted due to low laying fog. The lights helped and seeing the runway on Google Earth earlier meant that I knew where to expect the runway to be. It is interesting to note that only Runway 05 is used as the final approach is over sea. This is to avoid possible anti-aircraft gun fire!

Landing with no real troubles, I turned off the runway to see the same crescent moon in the same patch of sky. I forgot to check the time I landed but it could not have been a long flight. I know the next flight will be a very long one. 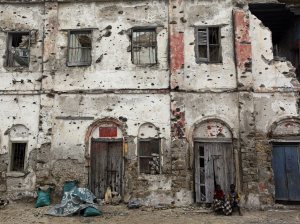 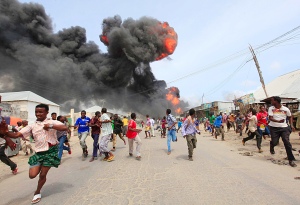 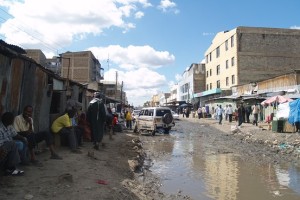 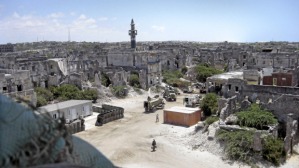 A Drive through Mogadishu – https://www.youtube.com/watch?v=ehesWgvmY2U