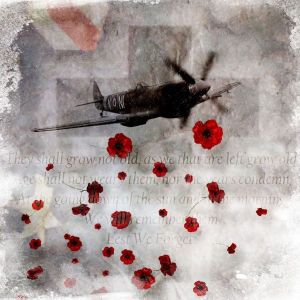 It’s the 11th of November today. This is a day marked in our lives to remember those brave men and women who have served their countries and paid the ultimate sacrifice. I strongly believe that more people should respect this day, and even more so, the 2 minutes silence held at 11:00 am. I don’t want to sound old fashioned but each and every one of us are enjoying the benefits from what all those soldiers fought for. I am told by my parents and of generations above me that entire towns would come to a stop at 11 o’clock. Allowing everybody to take just 2 minutes out of their entire year to pay well earned respects. I don’t think that it too much to ask for. Although it seems that these days the majority of high street stores and businesses will not take part in the silence. I don’t understand if this is out of greed of the businesses or more likely the lack of respect for their lost heroes.

My own grandfather fought his way through the second world war and for all the years I was lucky enough to know him, he would tell stories and tales of his accounts. No matter how many times I had heard them, I was always intently interested in them. Although he survived the war, my grandfather has passed away now and the days leading up to November 11th give me a great opportunity to remember his stories and remember what he, and many many others went through during those wars. Last year I was able to place a cross in his memory beneath the Scots Monument in Edinburgh and take this photo. There is a photograph of my Grandfather standing at the foot of the same monument during the war. I really would like to get a copy of that photograph.

I don’t have many close connections to anybody currently serving within the forces and there is an element of myself which is thankful for that. Not least because I would always have them in my mind, wondering what they would be going through, but also because I believe that we are fighting VERY different battles these days. During the world wars there was no choice but to defend the country against a foreign attacker. I have the utmost respect for that generation who had that mighty task forced upon them and were fighting for true values and freedom. The current battles we are fighting around the globe make me question our country’s intentions. We are not fighting an attacking force. Are WE not are the foreign forces in Afghanistan? After more than 10 years fighting there, what peace has been brought? Soldiers today, and the countless supporting crews, all have chosen for themselves to pursue this career. It was not forced upon them. Whilst I maintain huge respect for what these men and women contend with on a daily basis, I maintain a much greater respect for the generation who saw off the Second World War.

I wanted to do something a little different this year to pay respect and remember the fallen, especially from the Second World War. With my passion in aviation, how could I look beyond the RAF and the infamous Supermarine Spitfire? Growing up near Duxford airbase, UK, which was an active war time airfield, I have had many opportunities to see Spitfires take to the skies and hear the roar of the Rolls Royce Merlin engine scream overhead. As much as I would love to get even closer to one of these majestic birds I am again limited to my home surroundings of Edinburgh. I decided that it would be very fitting to have a replica model Spitfire sitting on my desk as I continue to fly around the world on my long adventure. So with this thought in mind, I bought an Airfix kit of  a Supermarine Spitfire Mk1a and a Messerschmitt Bf109E-4. Both aircraft come in the same box and are in a scale of 1:72 which should make it a small but simple kit to piece together. It has been quite a few years since I built model aircraft so it will be interesting to see how they turn out. I thought that I could document my building progress here on my blog and give you readers something else to look forward to.  I will take photos of the progress made and try to build a worthy representation.

For now though I end with the poem by Laurence Binyon. “For The Fallen.”

They went with songs to the battle, they were young.
Straight of limb, true of eyes, steady and aglow.
They were staunch to the end against odds uncounted,
They fell with their faces to the foe.

They shall grow not old, as we that are left grow old:
Age shall not weary them, nor the years condemn.
At the going down of the sun and in the morning,
We will remember them.

They mingle not with their laughing comrades again;
They sit no more at familiar tables of home;
They have no lot in our labour of the day-time;
They sleep beyond England’s foam
Lest we forget.